A beginner's guide to creating a research strategy for all of your papers.

"Summarizing a source usually means condensing ideas or information. You are not expected to include every repetition and detail. Rather, you extract only those points that seem important -- the main ideas, which in the original text may have been interwoven with less important material. A summary of several pages can sometimes be as brief as one sentence." -- Brenda Spatt, Writing from Sources

"In a discussion [with] a class of teachers, I once said that I liked some of the kids in my class much more than others and that, without saying which ones I liked best, I had told them so. After all, this is something that children know, whatever we tell them; it is futile to lie about it. Naturally, these teachers were horrified. 'What a terrible thing to say!' one said. 'I love all the children in my class exactly the same.' Nonsense; a teacher who says this is lying, to herself or to others, and probably doesn't like any of the children very much. Not that there is anything wrong with that; plenty of adults don't like children, and there is no reason why they should. But the trouble is that they feel they should, which makes them feel guilty, which makes them feel resentful, which in turn makes them try to work off their guilt with indulgence and their resentment with subtle cruelties -- cruelties of a kind that can be seen in many classrooms. Above all, it makes them put on the phony, syrupy, sickening voice and manner, and the fake smiles and forced, bright laughter that children see so much of in school, and rightly resent and hate." -- John Holt, from How Children Fail

In John Holt's view, although it is only natural for teachers to prefer some students to others, many teachers cannot accept their failure to like all equally well and express their inadequacy and dissatisfaction in ways that are harmful to the children.

"Paraphrase is the point-by-point recapitulation of another person's ideas, expressed in your own words. When you paraphrase, you retain everything about the original writing but the words." -- Brenda Spatt, Writing from Sources

"So, a leader doesn't have to possess all the virtuous qualities I've mentioned, but it's absolutely imperative that he seem to possess them. I'll go so far as to say this: if he had those qualities and observed them all the time, he'd be putting himself at risk. It's seeming to be virtuous that helps; as, for example, seeming to be compassionate, loyal, humane, honest and religious. And you can even be those things, so long as you're always mentally prepared to change as soon as your interests are threatened. What you have to understand is that a ruler, especially a ruler new to power, can't always behave in ways that would make people think a man good, because to stay in power he's frequently obliged to act against loyalty, against charity, against humanity and against religion. What matters is that he has the sort of character that can change tack as luck and circumstances demand, and, as I've already said, stick to the good if he can but know how to be bad when the occasion demands.

So a ruler must be extremely careful not to say anything that doesn't appear to be inspired by the five virtues listed above; he must seem and sound wholly compassionate, wholly loyal, wholly humane, wholly honest and wholly religious...Everyone sees what you seem to be, few have experience of who you really are, and those few won't have the courage to stand up to majority opinion underwritten by the authority of state. When they're weighing up what someone has achieved -- and this is particularly true with rulers, who can't be held to account -- people look at the end result. So if a leader does what it takes to win power and keep it, his methods will always be reckoned honorable and widely praised. The crowd is won over by appearances and final results. And the world is all crowd: the dissenting few find no space so long as the majority have any grounds at all for their opinions." -- Niccolo Machiavelli, The Prince

It is more important for a ruler to give the impression of goodness than to be good. In fact, real goodness can be a liability, but the pretense is always very effective. It is all very well to be virtuous, but it is vital to be able to shift in the other direction whenever circumstances require it. After all, rulers, especially recently elevated ones, have a duty to perform which may absolutely require them to act against the dictates of faith and compassion and kindness. One must act as circumstances require and, while it's good to be virtuous if you can, it's better to be bad if you must. In public, however, the ruler should appear to be entirely virtuous, and if his pretense is successful with the majority of people, then those who do see through the act will be outnumbered and impotent, especially since the ruler has the authority of government on his side. In the case of rulers, even more than for most men, the end justifies the means. If the ruler is able to assume power and administer it successfully, his actions will always be judged proper and satisfactory; for the common people will accept the pretense of virtue and the reality of success, and the astute will find no one is listening to their warnings.

Summarizing and Paraphrasing with Star Wars! 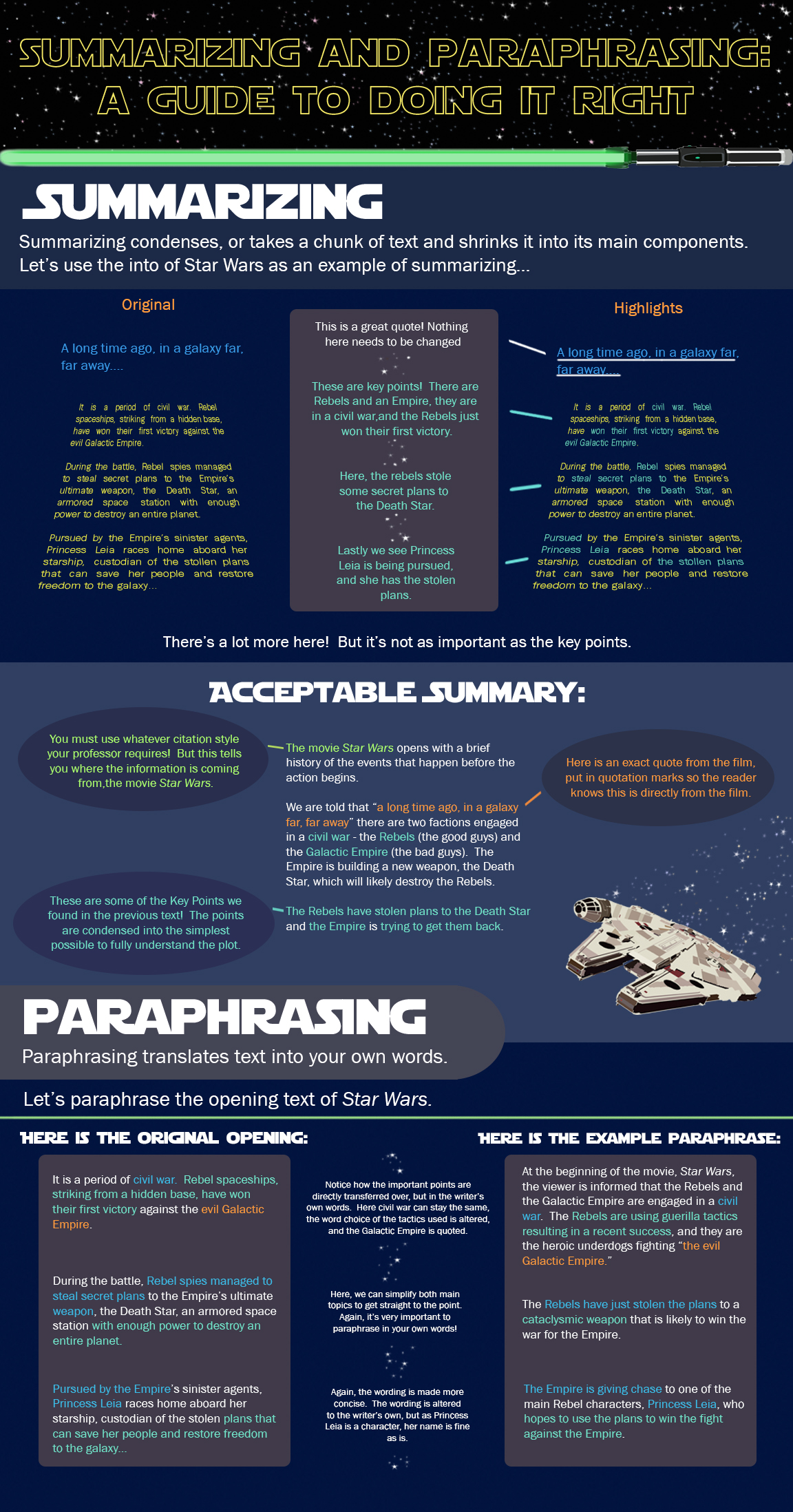 -- This infographic originally appeared in the New Literacies Alliance presentation Citations: The Foundation of Scholarly Conversation.

The simplest method of presentation is quotation in which the exact words of another person are used with quotation marks and appropriate citation.

Direct -- Robert Ingersoll condemned those who deny others their civil liberties: "I am the inferior of any man whose rights I trample underfoot."

Indirect -- Robert Ingersoll proclaimed that he was the inferior of any man whose rights he trampled underfoot.

Note: Many professors do not allow indirect quotation. Check with your professor in each class to learn her/his policy.