Friends of the Library at Sewanee: The University of the South 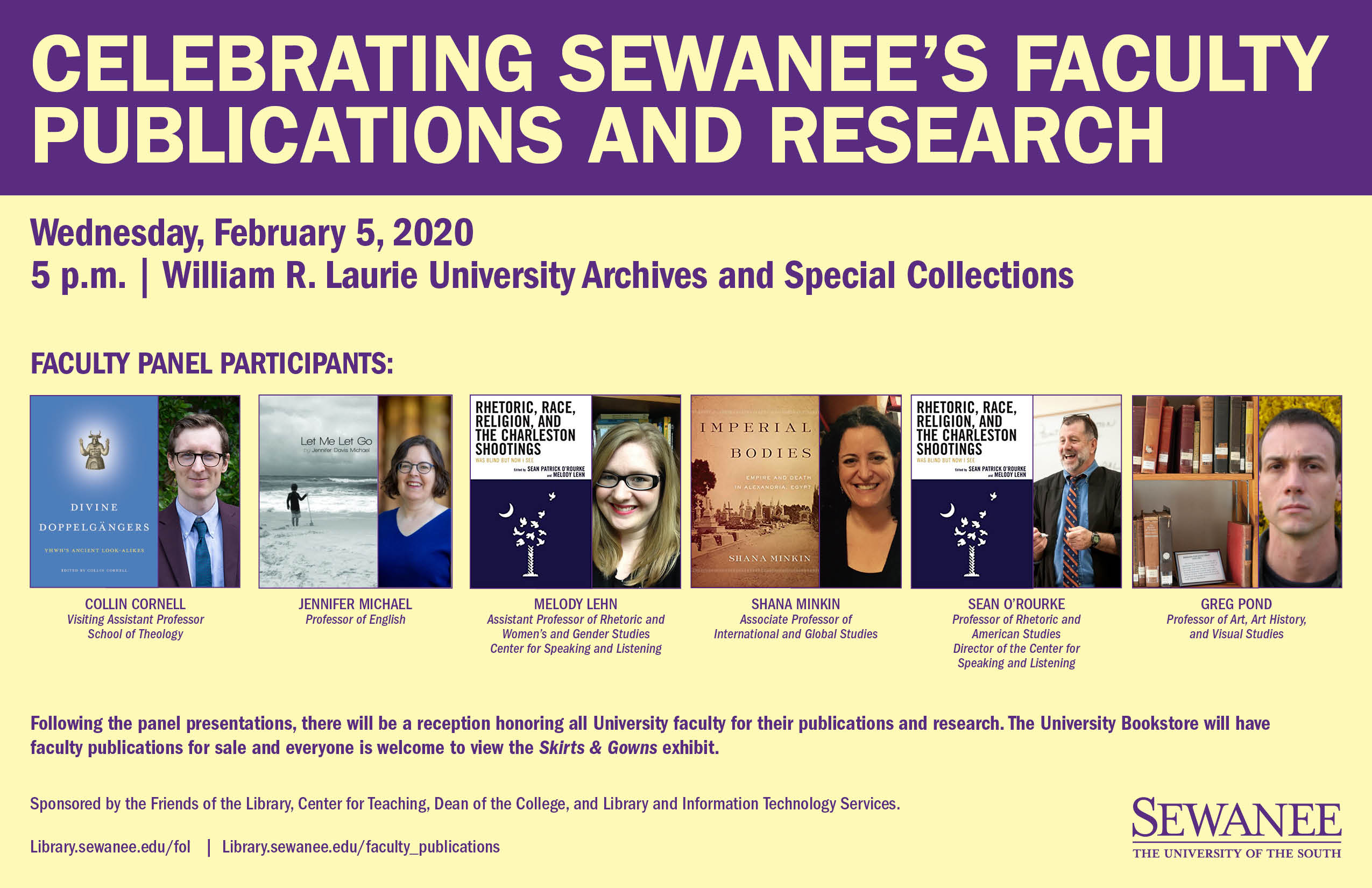 Why Study the South? Southern Studies in the 21st Century

Case Studies from the Body Farm

The Sewanee Review and the Future of Literary Magazines

Transformative Collaboration: the Appalachian College Association and the Bowen Central Library of Appalachia

Imagination as Mirror: What Speculative Fiction Can Teach Us About Our World

Reading for Pleasure, Reading for Spite: Gossip and Victorian Literature

Co-Sponsored with the School of Letters

Rational and Imaginative Persuasion: The Ambiguous Achievement of C.S. Lewis

Co-sponsored with the School of Letters

Storytelling: It's not what you think it is

German Women and the Long Shadow of

Author of Only Love Can Break Your Heart

Co-sponsored with School of Letters

from University Archives and Special

Boys to Men and Back Again

A Modest Proposal on Bonhoeffer and Biography

Special Collections: For the Love of Books

Dr. Samuel R. Williamson, 14th Vice-Chancellor of the University of the South and Professor of History Emeritus

The Start of the First World War: What Happened and Why It Still Matters

Co-Sponsored with Finding Your Place

Slow Reading in a Hurried Age

Medical Schools Through the Years

The Sky Above, the Mud Below: Prehistoric Rock Art in the Southeast

Co-sponsored with the Department of Anthrolopology

Co-sponsored with the School of Letters

"Hudson Stuck: 100 Year Anniversary of the Ascent of Denali"

"The Role of Data, Technology, and Analytics in the Presidential Elections"

Co-sponsored with the Math and Computer Science and Economics Departments, Sherwood Ebey Lecture.

Kevin Wilson, Assistant Professor in the Department of English

"The Family Fang and Readings from a Work in Progress"

Grant, Head of Acquisitions and Cataloging; and Rick Sommer

"The Library of the Future"

"I Totally Meant to do That"

"The Ballad Books and Southern Culture"

“The Movies of Alfred Hitchcock”

Sarah Sherwood, Assistant Professor of Anthropology, University of the South

“Archeological Research at the Bronze Age Site of Pecia in Romania”

“New Views of ‘Bloody Mary’ and the Tudor Counter-Reformation”

James C. Davidheiser, Professor of German, University of the South

“And They Lived Happily Ever After: The Brothers Grimm and Their Phenomenally Successful Fairy Tales”

“Who Owns the Dead? T.E. Lawrence of Arabia and his Disputed Reputation”

Robert Benson, Professor of English, University of the South

Reading from Blood and Memory, a memoir

Readings from his own poetry & prose

Robb White, humorist, naturalist and author of How To Build A Tin Canoe

Ninette Fahmy, Fulbright Visiting Scholar at the University and specialist in Egyptian politics

“Women and Human Rights in Egypt”

“The History of Scottish Books in the Colonial South”

“Honor and the Tragedy of Assassinations:  Julius Caesar and Abraham Lincoln”

Annie Armour, University Archivist, and Tam Carlson, Professor of English at the University

“The Present and Future State of the New Archives”

“Plans and Goals for the duPont Library”

William “Woody” Register, Professor of History and American Studies at the University

“The Biggest Playground on Earth:  Luna Park at Coney Island”

Paul Bergeron, Emeritus Professor of History, University of Tennessee and Brown Foundation Fellow at the University

“Andrew Johnson of Tennessee and His Presidency”

“George Garrett As A Man Of Letters”

Jon Meacham, Managing Editor of Newsweek and author of Franklin and Winston

“The Discovery of the Private Letters of FDR’s Great Love, Lucy Rutherford”

Gerald Smith, Professor of Religion at the University

“What We Can Learn From Cemeteries”

Samuel Williamson, retired Vice-Chancellor and President of the University

“Higher Education and the Vietnam War”

“It Happened Here in the Civil War”

“Thornton Wilder’s Novels, Heaven’s My Destiny and The Eighth Day”

“Admitted Fiction:  From Journalist to Writer of Fiction”

“Tibetan Politics and the Great Game”

Joel Cunningham, Vice-Chancellor and President of the University

“Reflections on My First Year at Sewanee”

James Waring McCrady, Emeritus Professor of French at the University

Charles B. Lowry, Dean of Libraries, University of Maryland

“Libraries in An Age of Change:  Timeless Purpose and Scholarship”

Richard Henderson, Associate Provost for Information Services at the University

Readings from his own works

Edmund Ball, author of Slaves in the Family

Lyle Leverich, Scholar-in-Residence, Head of the Editorial Board, Tennessee Williams Literary Journal, and biographer of Williams

Charles Cullen, President and Librarian of the Newberry Library, Chicago

William T. Cocke III, Professor of English at the University

James Dunkly, School of Theology Librarian, and Annie Armour, University Archivist, gave a tour of the rare book area and spoke about some of the more interesting items in the collection.

Garret Keizer, Chair of the Department of English, Lake Region Union High School in Vermont and author of A Dresser of Sycamore Trees

“The Books That Change Our Lives?”

“Public Health in East Tennessee:  Towards Healthier Communities in Appalachia”

“The End of the Print Age”

“The House of Percy:  Honor, Mind and Melancholy in a Southern Family”

“Fiction to Film:  Ashes on the Screen”

Reed Whittemore, Poet and Brown Foundation Fellow at the University

Readings from his poetry

Wyatt Prunty, Poet, Literary Critic, Professor of English and Director of the Sewanee Writers’ Conference at the University of the South

Readings from his own books of poetry

George Connor, Emeritus Professor of English at the University of Tennessee at Chattanooga

“Some Notes on Overstuffed Biographies”

Walter Harrelson, Professor of Old Testament and Dean at Vanderbilt Divinity School and an authority on translations of the Bible

“The Difficulties of Biblical Translation”

Walter Sullivan, author and Professor of English at Vanderbilt University

“Shaping the Literary Canon:  A Modest Defense of the Classics”

“Reviewers and Reviewing in the Mass Media:  Research and Ruminations”

Glynne Wickham, Brown Foundation Fellow in Speech and Drama and an authority on the English theatre

“William Shakespeare, King’s Man:  The Page and His Patron”

Reading from his work in progress

Reading from her work in progress, Scenes from Two Lives

Viewing of items from Bishop Gailor’s Library and architectural books, presented by the father of Vice-Chancellor Bob Ayres

Will Campbell, Raconteur and award-winning author

“Words, and How We Use Them”

“A New Jersey Writer In Dixie”

Thaddeus Lockard, Emeritus Professor of German at the University