Long before the First World War, the federal government had a general agreement on how foreign civilians living in the U.S. should be treated if their host 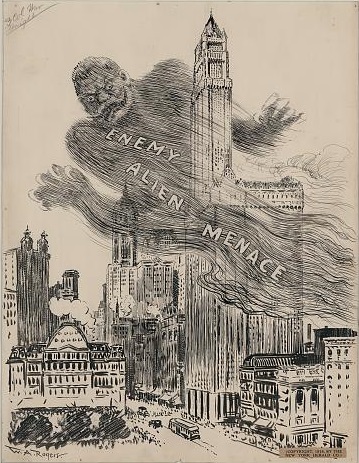 country declared war on the U.S. Specific to Germany, the Treaty of Amity and Commerce between the United States and His Majesty the King of Prussia, negotiated by Benjamin Franklin, Thomas Jefferson, and John Adams in 1785, provided that enemy nationals were to be given six to nine months to settle their affairs and leave the country. In 1918, Arthur Zimmermann, the State Secretary for Foreign Affairs of the German Empire, attempted, and failed, to reach a similar agreement with the U.S. on the treatment of civilian aliens in their respective countries.

As a result, German civilians trapped in the country fell under new regulations when the U.S. entered the war. In his declaration of war of April 6, 1917, President Wilson clarified the rules that applied to the enemy aliens. The most important part of Wilson’s proclamation, from a German standpoint, was the following paragraph: 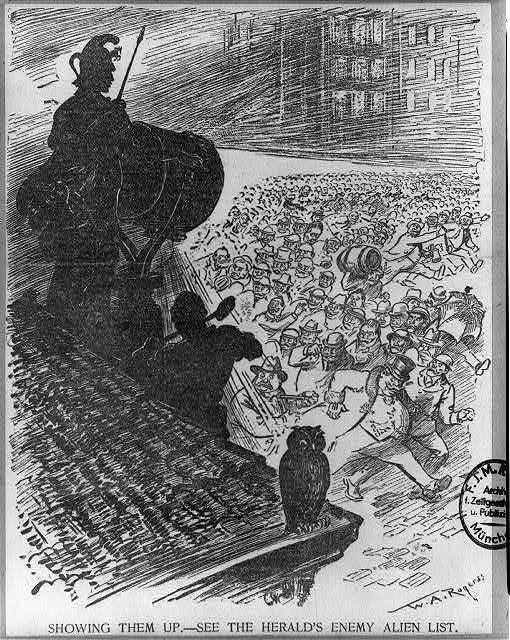 so long as [German citizens] shall conduct themselves in accordance with the law, they shall be undisturbed in the peaceful pursuit of their lives and occupations […]; and towards such alien enemies, as conduct themselves in accordance with the law, all citizens of the United States are enjoined to preserve the peace and to treat them with all such friendliness as may be compatible with loyalty and allegiance to the United States.

From a legal perspective, until the passing of the Espionage and Sabotage acts in 1918, the Department of Justice (DOJ) had limited legal powers through which to act against enemy aliens accused of anti-American actions. Once these acts were passed, the public’s enthusiasm for keeping vigilant over suspected disloyalty, German propaganda, and sabotage attempts increased the number of claims that were submitted. The DOJ felt justified in expediting the legal process, and attorneys all over the country made special arrangements with the judges for special terms of court and grand juries. Very few enemy aliens were involved in subversive acts; however, due to the anti-German hysteria that swept through the country, few distinctions were made between suspicion and fact. Alleged and actual crimes ranged from anti-American or pro-German utterances to the dynamiting of bridges and munitions factories. The press publicized the arrests and sensationalized them for the sake of boosting the war spirit.

One of the greatest weaknesses of the war-time regulations was the imprecision of the terms used. Expressions like “a menace to national safety” and “antagonizing our national interests” were sufficiently vague that a wide range of charges could fit under them. It also became increasingly difficult, for instance, to distinguish between a legitimate claim to free speech and subversive enemy propaganda. However, most disturbing was the way in which patriotic citizens spied on and denounced their neighbors and co-workers. War-time hysteria and anti-German sentiment rendered thousands of foreign citizens vulnerable to the public, which was ready to label anyone a propagandist who could not prove his or her loyalty to the U.S. war effort.