When the U.S. entered the war, anti-war sentiment and pacifist movements were active across the country. President Wilson knew that a successful entry to the war depended on unanimous support from the home front. Despite posing as an ardent supporter of free speech, Wilson, therefore, was intent on silencing the voices of dissent. Toward this end, in a 1918 report, Attorney General Thomas Gregory pointed out that the Department of Justice currently had very limited legal power to stand up against conspiracy and propaganda. He proposed the introduction of two bills, the Espionage and Sedition acts, which enabled his department to take legal action against dissidents. 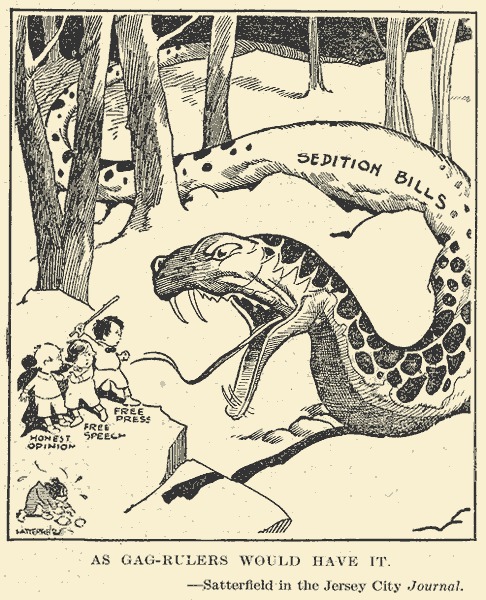 The Espionage Act, introduced on June 5, 1917, made punishable any acts aimed at obstructing military operations or enlistment to the armed services. The Attorney General made sure that the act was constructed in the broadest sense, significantly reducing the burden of proof for local U.S. attorneys, who commented on “how little evidence” was needed “to connect most” of the persons convicted under the Espionage Act “with any direct evidence of substantial violation of that act.”

When a federal judge acquitted a man who called the President “a Wall Street tool” (arguing that the statement, however distasteful, did not directly obstruct the army, the navy, or the enlistment of soldiers), the Attorney General called for the amendment of the Espionage Act. On May 16, 1918, the Sedition Act was passed, which allowed for the prosecution of “any disloyal, profane, scurrilous, or abusive language about the form of government of the United States, or the uniform of the Army or Navy,” or any language that might bring those institutions “into contempt, scorn, contumely, or disrepute.” The Attorney General’s official justification for the Sedition Act was to prevent “the quick-tempered vigilantism of the loyal citizenry.” However, his reluctance to prosecute mob vigilantism and his eagerness to subvert free speech reveal his true motive to squelch dissent. Reflecting his intent, many federal attorneys and federal district judges seemed determined to surpass each other in their aggressive enforcement of these acts. One observer noted that “now every U. S. Attorney became ‘an angel’ of life and death clothed with the power to walk up and down his district, saying, ‘This one will I spare, and that one will I smite.’”

After the war, the Supreme Court was reluctant to overturn the two war-era acts nor did it overrule the majority of the convictions made during the war, despite petitions to do so. Not until 1923 did the federal government finally conclude that the original aims behind the prosecution of persons under the Espionage and Sedition acts had been achieved. The U.S. Pardon Attorney lauded the government’s war against dissidents as a success: “It’s exceedingly fortunate that the government has [… ] kept a sufficient number of them in prison to set an example of firmness that will go down in history as a warning to those who in the future might be inclined to harbinger and harass the government.” However, the true legacy of the laws, as a means to suppress dissent, set a precedent for the 1950s anti-communist witch hunts and the subsequent attempts to discredit grass-roots movements for peace, civil rights, and women’s rights.